If you've seen my recent posts, you can tell that I've been guilty of indulging in some less healthy dishes. Watching the Food Network late at night can do that to you. Well, I'm making a change this week and presenting meals that are easier on the waistline, specifically, my waistline. In an effort to lower the number on the scale, I am preparing a healthy yet flavorful Moroccan chicken pita sandwich. Braised chicken is tossed with olives, roasted peppers, and tomatoes and stuffed in warm pita bread to make one flavorful and satisfying meal. Although this recipe uses chicken drumsticks, feel free to substitute with chicken breast for an even healthier meal. I personally prefer the dark meat because it's much more tender and juicy. Dark meat is more forgiving than light, especially when it comes to long cooking periods. When preparing the chicken, all the flavor comes from the olives, lemon, and the chicken itself. You can already see the broth being flavored from the fond as soon as it is added to the pot. The fond refers to the browned bits and caramelized drippings from the chicken that was seared in the previous step. Another reason I prefer to use chicken legs instead of chicken breast is the bone. The bone imparts more flavor to the broth, which will later become a sauce and binder for the filling. A short while later and the chicken is falling off the bone. Toss together with the tomatoes, olives, roasted peppers, lemon juice, and broth. Stuff in warm pita bread and you have your Moroccan chicken pita sandwich. The fresh, bright tomatoes with the briny olives and juicy chicken is a wonderful combination. Enjoy with hummus or even tzatziki for extra oomph. Lunch is served! 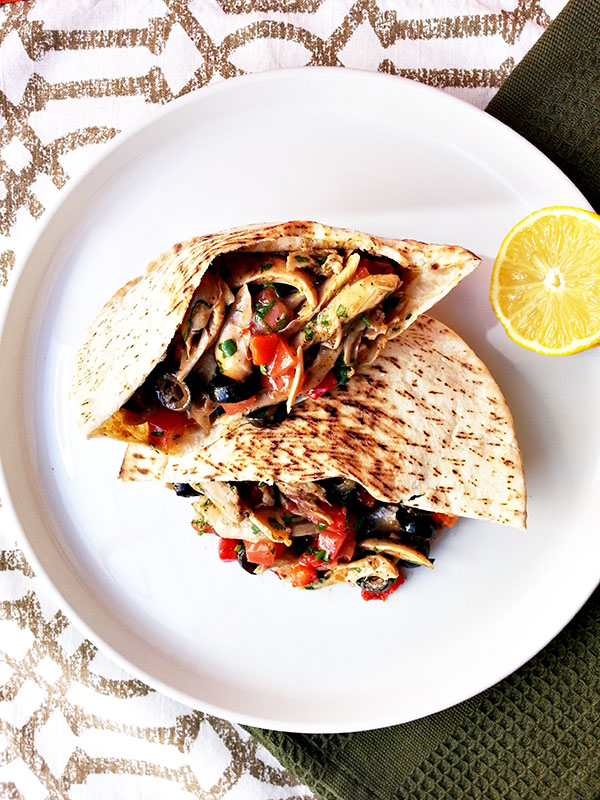