Cherry on my Sundae While strolling the frozen section at the market, my eye caught a box of Sara Lee’s chocolate covered cheesecake bites. As unhealthy as they are, certain Sara Lee’s products are just too darn good to pass up. While my favorite is their pound cake, I’ll catch myself indulging in their cheesecake bites every once in a while. Rather than buying the already made cheesecake, I decided to give it a go and try making the bites. Make this dessert for your Thanksgiving or Christmas gathering; the miniature size is perfect for your large gatherings!

If you’re looking for a dessert for your holiday gathering, chocolate covered cheesecake bites are the way to go. Not only does it look impressive, but it’s also rich, creamy and delicious.

The cheesecake alone is phenomenal; much creamier than the store-bought cheesecakes. The secret to having a creamy cheesecake is to use softened cream cheese. This will make it easier to beat and cream with the eggs and sugar. You want to make sure to beat until you have no lumps but not over-beat.

Water baths are the traditional way to baking a cheesecake; another technique that contributes to the creamy texture. I’ve seen many recipes that instruct you to leave the cheesecake in the oven after it has finished cooking, but this can often lead to a cracked and overcooked cheesecake.

I originally made the crust up the sides of the pan but realized after that it was unnecessary since they will be cut and turned into bites. If you want that extra side of the crust, by all means, knock yourself out! 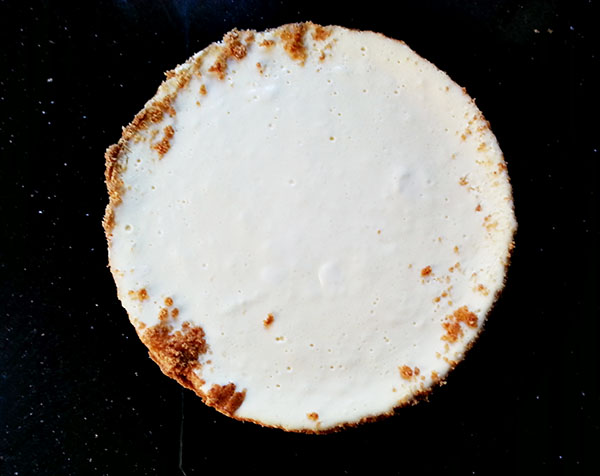 When portioning the bites, keep in mind that they will be a bit larger in size after the chocolate coating. I sized mine at 1 1/2 inches; however, you can make them smaller at 1-inch squares. Make sure to dip your knife in hot water and wipe with a clean towel in between every slice. This allows you to have clean slices every time. If you find that the cheesecake is too soft, leave it in the freezer to set. 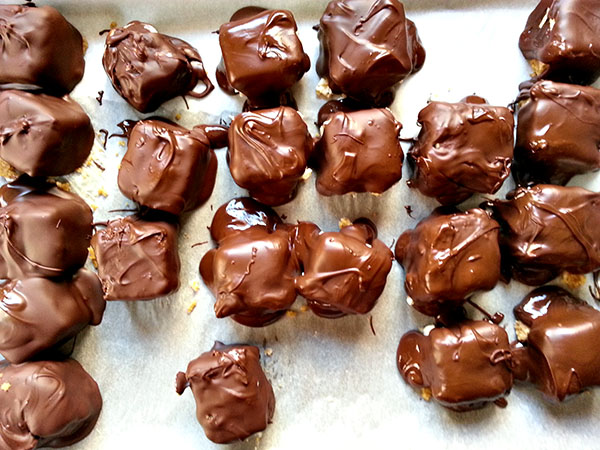 Once the chocolate has set, dig in! You can also store these in the freezer until consumption. Just as expected, these cheesecake bites were outstanding. The cheesecake alone was already creamy, rich and just the right amount of sweet. Pair that with a chocolate coating and you have heaven. After they are frozen, they become something else that’s just as delicious. The cheesecake becomes almost like ice cream; just imagine chocolate covered cheesecake ice cream! Absolutely worth the effort. 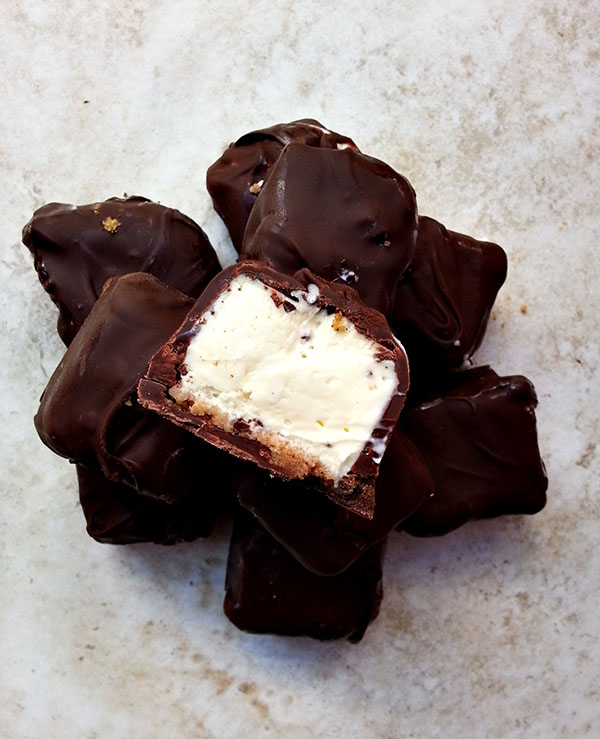